Ivan Pavlov was a Russian physiologist which is a bit ironic due to the fact that he was a major influence in the field of psychology specifically in Behaviorism. Pavlov discovered the concept of classical conditioning while studying the digestion in dogs. By doing so he noticed how the dogs began to salivate as soon as one of his assistants entered the room. Throughout his research Pavlov and his assistants would present food to the dogs and measured the saliva that was produced as a result. Pavlov noted salivation was a reflexive process that occurs automatically under stimulus not under consciousness. Meaning dogs don’t learn to salivate whenever they see food, it’s a stimulus-response connection that they don’t need to learn, an unconditioned reflex. However, when he noticed that his dogs would begin to salivate whenever he entered the room, even when he was not bringing them food, that is when he realized the salivary response was not due to an automatic physiological process.

Pavlov discovered that the salivary response was a learned response. Anything the dogs learned to associate with food triggered the same response. For example, the assistants whom the animals learned usually walked in with food they were the neutral stimulus. The salivary response to the presentation of food is an unconditioned reflex, salivating to the expectation of food is a conditioned reflex. As a result, learning changed the behavior of the animals.

After making that scientific discovery Pavlov dedicated himself to study that type of learning. In a similar experiment Pavlov used a bell as a neutral stimulus and food as the unconditioned stimulus once more. Every time he fed the dogs he rang a bell. After doing this same procedure continuously when he rang the bell with no food present the dogs still salivated. Similar to the last experiment the dogs learned to associate the bell ringing to getting fed, leading them to believe every time the bell rings they will get fed. The bell had now become a conditioned stimulus to the dogs. A new behavior was learned, a conditional response. 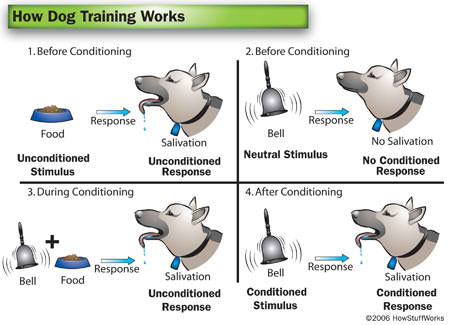